A study published almost two years ago by Science, revealed that Scythian nomads of the Iron Age already practiced selective breeding of horses.

Do we delve into the history the Scythians shared with horses?

The Scythians did not conceive of life or death without horses. It was common for them to decorate the tails of their animals by braiding them to make them look like a bunch of snakes.

Scythian shepherds roamed the steppes of Central Asia between the XNUMXth and XNUMXst centuries BC. They lived in carts covered by tents. These Scythians they carried out the breeding of horses to achieve an animal that adapted to their way of life and their demands.

The horse rearing of the Scythians

Los investigadores studied the remains of the horses from the graves real of the Scythians, which were in an optimal state of conservation. The number of specimens found in the tombs is numerous, in one of them more than 200 remains of different horses were found.

According to Herodotus texts, in Scythian funeral rituals, horses donated by allied tribes were sacrificed. This partly explains the large number of specimens found and the variety. The vast majority of the equines in these graves were unrelated.

DNA tests reveal a great diversity in the layer of the Scythian horses, among which were: black, chestnut, chestnut, cream and stained layers. 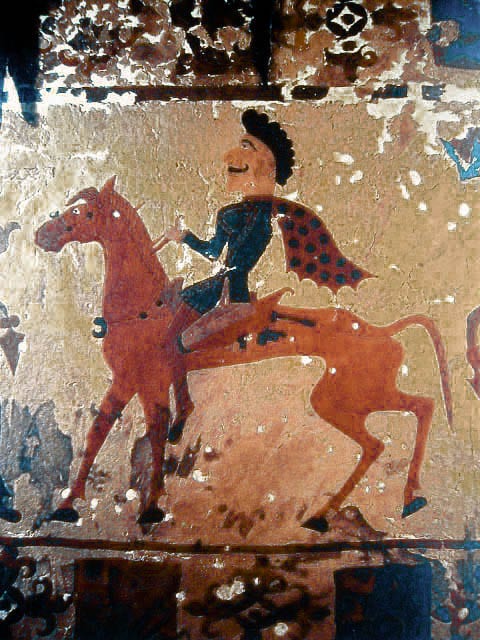 It has also been found that did not carry the mutation responsible for the alternate trot, although there were variants associated with the short distance gallop of today's horses. No doubt the Scythians they appreciated the endurance and speed of their horses.

The first domesticated horses descended from several stallions, although this diversity has been lost over time.

Another interesting fact that has been discovered is that the Scythians they maintained the natural herd structures of the horses rather than selecting only a few individuals. This is a stark contrast to today, where a single stallion is used for a large number of crosses and as a result, almost all horses today have practically the same Y chromosome haplotype.

Most of the genes used, a total of 121, refer to the forelimbs, something that also agrees with the size of the bones. They were robust horses.

Therefore we can say that horse breeding began about 5.500 years ago.

What did the Scythians use horses for?

Studies indicate that these animals were used to eat their meat and drink their milk (as can be seen in the main image of the article). This implied a specific selection of animals that had an increase in the lactation period, something that has been found out thanks to genetic studies. Besides milk they made cheeses and Koumiss, an alcoholic beverage made from yogurt.

Scythian culture was closely linked to war. They were defined by their enemies as the most savage and bloodthirsty warriors of the time. They were great horsemen and fearsome archers on their mounts. The nobles formed an elite of cavalry, with the best armor and pieces that can be precursors of the future cavalry fences.

Almost all the men of adulthood and many of the women participated in the battles. Most rode on horseback, forming a light cavalry of archers., the rest consisted of an infantry made up of the poorest and a heavy cavalry made up of princes and his escorts.

No detailed or concrete data is preserved of the tactics they used in battles, but it is clear that horses played a prominent role in them.

Such was the importance that men and women rode horses in specifically designed pants for that function. They developed the rigid saddle for riding. These saddles were made up of three parts: a first that was glued to the body of the horse that padded the blows of the rest of the components to avoid damaging the animal, a kind of pad; on it, a framework made with the antlers of the deer or wooden branches was arranged; Finally, the seat, also as padding to protect the rider from blows, was made of sheepskin or sheepskin stuffed with animal hair.

The mounts were rudimentary, they had no stirrups, but still the riders kept their balance on the animal. The Scythians they rode with great skill on horseback in times when European peoples had not even developed cavalry corps in war. This gave the Scythians a great advantage in numerous battles.