The Wine Horses is a festival celebrated in Caravaca de la Cruz (Murcia) on the dates of May 1 and 2. This celebration, which has been gaining popularity over the years, is celebrated during the Festivities in Honor of the Blessed Sacrament and Vera Cruz that span from May 1 to 5.

Do we know a little more about what this festival related to equines consists of?

The major festival of the city of Caravaca de la Cruz year after year attracts more visitors from all over the world. In recent years, a number of more than 100.000 people. 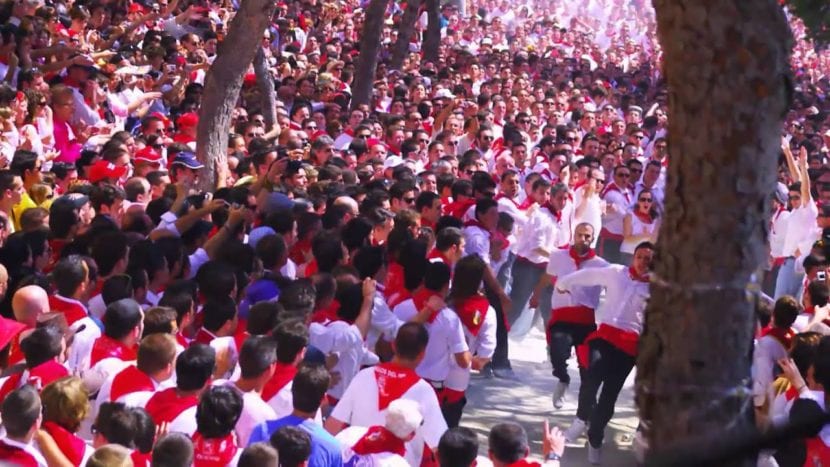 History of the Wine Horses

The origins of the festival are diluted between history and legend. Tradition has it that when the Templar fortress of Caravaca was besieged by the Granada Moors around 1250, There came a time when the reservoirs did not provide enough to supply everyone. A group of Knights Templar decided to cross the Muslim site in search of the desired water.

When they could not get water, they loaded wine in hides on the back of animals and they ran back to outwit the enemy and the fence that had been arranged around the Castle. Upon their return they were greeted with joy, they were considered heroes by saving them from the situation in which they had found themselves. The knights and their steeds were adorned with robes of rich embroidery and bouquets of flowers.

As early as 1231 in the castle to which these knights returned, the Relic of the Holy Cross was guarded.

Since the Middle Ages it has been celebrating this festival that recalls the feat of the group of Knights Templar. In some times the party was more splendid than in others. However, it wouldn't be until XNUMXth century when the party was officially configured, years later already in full Romanticism, the party would be structured in the way that today has come to us.

En 1959 a renewal of the festivities was carried out since during the Civil War and the postwar period, it had been celebrated as best it could. It was on this date when groups of Moors and Christians were created, in addition to many of the peñas that still participate in the celebration. The cloaks worn by the Wine Horses would also be renewed.

These contests take place on May 1 and 2. But also, on the 3rd the little ones can participate in the party with ponies that represents the Band of the Wine Horses.

The celebration of Los Caballos del Vino and the festival in Honor of the Holy and Vera Cruz, starts on May 1, taking the horses out to the street to assess their morphology. The horse is shown this first day in its most natural state, neat, well brushed so that the hair is shiny. The smooth or braided manes or any other hairstyle that the rock decides.

It is done first a parade in which the rocks show their horses, some make them gallop while others walk them calmly so that their beauty can be appreciated. During that tour does a short test of the race that will take place the next day.

At the end this parade, the judges of the Wine Horse Band, point out those horses that have stood out this year and they give trophies to the peñas winners.

Then the horses are removed from the streets so that they can rest in their stables or farms.

The Hair contest has been held since 1980, and the beauty and bearing of the horses is valued. There are no regulations, so the selection of the winners is at the discretion of the jury.

The Peñas that have stood out the most have been Zuagir, Mudacid, Terry and Chirinos, the latter being the winner for six consecutive years.

The second day of the party begins in the early morning with the washing and harnessing of the horse in more than forty different sites throughout the city. This ritual usually has few spectators, beyond those linked to the caballistas' clubs or the families of the city. After this, the horses take over the streets of the city and the famous Los Caballos del Vino race takes place.

Harnessing includes both the design of the cloak and the tailoring and embroidery based on silk, rhinestones and gold and silver rim. The cloak is made up of eighteen pieces: the rogue for the head, the feathers that crown it, two jackets adorned with colored ribbons, two ramaleras, the flag, the breastplate, two crinera, two blankets, two tarps, the butt and two wristbands. All topped with tassels and the jalma where the pieces are attached.

Not only the clothing that the horse wears is valued but its presentation about the animal, appreciating the harmony between the animal and its clothing. The important thing is how the horse looks in its clothes and maintaining its composure throughout the day.

The oldest preserved documents that speak about the decoration of Los Caballos del Vino date back to the XNUMXth century.

In the beginning, the Wine Horses They were dressed in bedspreads, manila shawls or trousseau of the brides. Later with the renovation of the parties, specific cloaks began to be made for horses. The work of embroiderers and mantle designers began to gain relevance until it was really well recognized in the city. Each mantle, which it is embroidered with silk and gold, it can take a whole year to be made and cost thousands of euros.

The Wine Horse race has more and more followers and fame, it is the most popular contest within the large festivals of Caravaca de la Cruz.

It is conceived as a time trial in which the horses compete of the different caballistas' clubs that participate in the celebration. Accompanying the horse are four horsemen who run alongside the animal on the so-called “Cuesta del Castillo”. Let's watch a video of one of these races before going on to explain this contest in more depth.

The animals climb “La Cuesta del Castillo”, a distance of 80 meters with a slope of 14%, saving a drop of 11 meters.

In the race, the horses, one by one, run accompanied by the four horsemen, two in front and two behind, accompanying the animal clinging to him. If any of them are released before crossing the finish line, elimination occurs of that horse.

The race is timed with advanced systems, but over time manual measurements with the flag were used at the start. The audience's own cheers have also served as a measurement system in the past.

Long ago it was awarded with cash, however today, it is the encouragement to arrive first and the pride that comes with it that motivates the participants.

At the end of the race, on the esplanade of the Real Basilica Santaurio, the trophies of the different categories are presented.

The exact chronology of when these races began is unknown, although the Oral testimonies already speak of the mid-nineteenth century, from where each time it was having more roots. From 1894 they began to be advertised in some party programs qualifying them as traditional, which tells us that they were already ingrained at that time.

Traditionally the same horses were used as for agricultural tasks. It would be from 1960 when they begin to select the animals, and to specialize them for this work: exercise, food and care. In the same way, horsemen began training throughout the year as well.

In recent years, the results of the races have been lowered by up to 7 seconds, something that would not have been possible without the training and time invested by horsemen and their horses throughout the year.

As a curiosity, the best time recorded to date was 7 seconds and 713 thousandths, reached by the Peña Artesano in 2016.

This celebration is one of the most important and representative of Caravaca de la Cruz. On 2004, the Festivities in Honor of the Santísima and Vera Cruz were declared of International Tourist Interest and specifically the celebration of the Wine Horses aspires to be declared Intangible Cultural Heritage of Humanity by Unesco.