Trakehner horses originate from East Prussia, in a region that once belonged to Germany, then Russia, and is now a part of Poland. However, this breed is still known as "The East Prussian Hot Blood Horse"

It is one of the oldest breeds of warm-blooded horses in the world. They are very associated with horse riding and they are of great importance in the world of equine sport and dressage. There are always Trakehner specimens in international and national tournaments.

Do we know him a little better?

The Trakehner breed has had many Olympic successes, especially in dressage and full show. But it does not only stand out in sport, it is a very suitable horse for driving and leisure. We are therefore before a versatile equine.

As a curious fact, in the city of Verden in Lower Saxony, there is a statue of Tempelhüter, a famous stallion of the breed.

We are in front of some equines of very elegant and noble bearing, with a height at the withers that ranges from 162 cm to 168 cm. Its head, with a straight profile, is well proportioned and has a broad forehead and large eyes. Their  limbs and joints are strong and end up in hard hats. In addition, the rather short length of the rod makes it closer to the ground.

Another characteristic of the breeds are their powerful hindquarters, which make you stand out in show jumping races.

El fur of this breed, it may be any of the solid layers, highlighting the chestnut, chestnut, dark chestnut and black layers.

There was a time that among warm-blooded horses, as is the breed in question, it was a matter of not having capes pious. The Trakehners were the exception.

As another curious fact regarding the fur, At the beginning of the breeding of the breed, the color of its coat was taken into account Well, according to its variety they were considered to have differentiating physiological features. For example, chestnut-coated mares were said to be sensitive, of great potential and elegance. They were believed to be descendants of an English Thoroughbred Stallion and the only line coming from the Hanoverian breed founded by a Trakehner stallion. 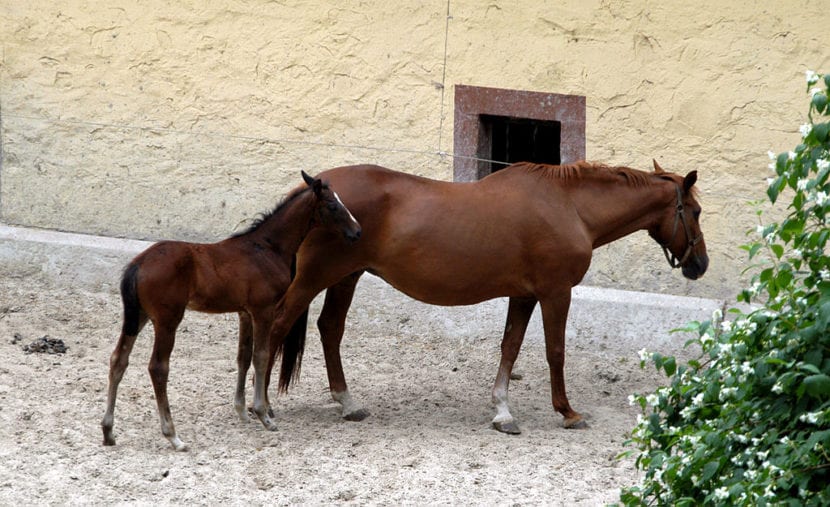 As to its character, sometimes they show they have a great sensitivity, strength and resistance. This has made them famous for being difficult horses, but under their rider they become a reliable animal.

When the region was colonized by the Order of the Teutonic Knights in the XNUMXth century. A small local equine named Schewiken began to breed. They were horses that stood out in their resistance and flexibility, coming from the Konik race and the primitive Tarpan. These equines were crossed with oriental horses and thus the East Prussian Horse was born.

However to speak of official origin of the breed, we must go a few centuries forward. On 1732, Frederick I of Prussia founds a saddle horse farm in the city of Trakehnen. The purpose of the breed was to serve as a mount for the army and at the same time ennoble the local breed: the Schweiken horses. To make it, it was decided to cross the local breed with English and Arab thoroughbreds, resulting in the Trakehner breed and the Trakehnen Stud.

Until the start of the First World War, the armies got a good refreshment horse to travel and wanted to continue in the search for an equine that would meet all their expectations: a breed resistant to the adversities of war, brave to endure the noises of battle without fear and visually attractive as it must have been officers' saddle. Under all this, the race ended up taking shape.

In addition to being destined to be a saddle horse, farmers discovered that it was an animal with good work skills and that it required little maintenance. By way of began to be raised also as a work horse which would not take long to turn it into an elegant draft horse for more select carriages.

So we are faced with two versions of the same breed, but both with good skills as a saddle horse. Little by little these two versions they were mixed, consolidating the current Trankener race.

During the World War I, Trakehner horses had a considerable reduction in their number of specimens. It fell to the breeders the great task of managing to overcome the figures and restore quality to the breed. However, the harsh weather conditions and the invasion of the Russian army made people have to abandon their home and life. Therefore the breeders could not do their job. On 1944, Trakehnen's main stud evacuatedAround 800 mares, stallions and foals went to Russia.

By the time the people of Trakehnen were able to flee, only a handful of horses of the breed they had so carefully raised had survived. But thanks to some breeders, the breed managed to move on not so its place of origin, since Trakehnen does not exist today.

Some of these equines were taken to Kirov where the Russian Trakehner would emerge.

During the Second World War, the race was again in danger of extinction. The war and famine in Germany caused many equines to die or be slaughtered for meat. They were saved when specimens were transferred to Germany. There they registered and began to be bred, getting very balanced horses. In 1947, the West German Association of breeders and friends of the Sangre Caliente horse of Trakehner origin was established. The breed began to be restored, beginning with find and gather those specimens that had survived. I would suggest in Germany the Gesellschaft by Trakehner, a association to promote the breed that would spread to the whole world.

The Trakehners were used to improve other competitive equine breeds as is the case with Hanoverian horses.

Today is a race that is increasing both in specimens and spreading throughout the world. In Germany for example, there are registered around five thousand copies.