The heavy constitution of the Oldenburg breed, has made these equines were present in numerous battles. A horse that was ideal as a carriage horse and that over time gained fame as a saddle horse. It is a very versatile equine, which stands out in different equestrian competitions, which we will talk about later.

The history of the Oldenburg horse begins early XNUMXth century. There fame and renown that this equine acquired throughout all of Europe, is largely due to Count Anton Günter von Oldenburg. Said Count, in addition to being a famous horseman, was a great defender of this breed of German horses.

Oldemburg, even within the hot bloods, possess an expressive and springy style with a great deal of suspension. In addition, the quality of the walk, trot or gallop is very good.

With a lift between 160 and 172 cm high at the withers, it is considered one of the largest German saddle horse breeds.

It has a rectilinear profile head which is somewhat crude and is based on a long thick neck. His shoulders are very muscular and his chest somewhat vast. They have a strong back and a excellent lomar depth. Their limbs are rather short and with well arranged hocks.

Between the Oldenburg more modern, the rather long limbs and great expressiveness on the heads.

Although its coat can admit different colors, the most common is to find brown, black, chestnut and berry layers.

As for character, they are animals docile but with a hint of daring. In addition, they are equines that they mature very soon and they show tremendously faithful to their caretakers and owners.

The modern Oldenburg, can be distinguished by the mark of the "O" and above a crown, which is arranged on the left hip. 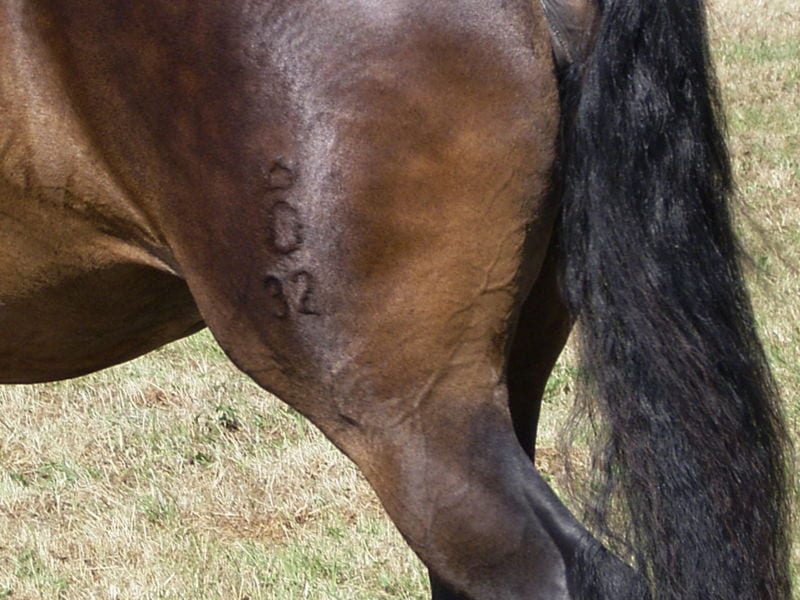 The horses that populated the Oldenburg region before the seventeenth century were small and flat equines, but they were strong enough to work the heavy soil of the Frisian coast.

The beginnings of the breed

One of the first to show interest in horse breeding in that specific area, it was Count Johann XVI, who bought Frederiksborgers from Denmark, refined Turkish horses, mighty Neapolitan horses, and Andalusian horses. His successor, the already appointed Count Anton Gunther, added to all these equines the most desirable horses of the time. And, in addition, he made stallions available to his tenants.

Over time Oldenburg equines became luxurious horses for elegant, flyover carriages. And besides, they were excellent equines for farm work.

There are three important moments that we must highlight in the history of this breed as they contributed to shaping it. On 1820, the Oldenburg stallion it was approved for the first time. On 1861, this breed was introduced in the registry of German breeds. And finally, 1923, the Oldenburg horse study book and the Ostfriesen equine study book were merged and Oldenburg Horse Breeders Association formed of today.

The great change of the race

The Oldeburg horse, as is common in many breeds, has undergone various changes to the lake of its history. These changes have led him to become the breed that we can appreciate today. These equines became considered one of the most suitable horses for racing and equestrian competitions, especially dressage and attraillados, all due to the notable improvement of the characteristics and skills that define them today.

Throughout its history, the Oldenburg breed has received an impressive genetic variety. Breeds such as Neapolitans, Andalusians, Berbers, Cleveland Bay, Normans and Thoroughbreds, they shaped the Oldenburgs.

The breed was built on a foundation made up of farm mares and all-purpose carriages.

The breed had a myriad of uses: carriage horse, artillery horse, farm horse. However with the advent of mechanization, during the fifties and sixties, they were replaced in those tasks that they had been performing. The need for carriage horses was greatly reduced in the XNUMXth century. However, increased leisure and recreational riding caused the Oldenburg breeders to change the direction of the breed. They tried to come up with riding horses that would have the same fame as their carriage horses. The crosses with Thoroughbred English and Norman, gave as resulting in a versatile saddle equine.

Artificial insemination technology and advances meant that stallions didn't have to be around to be part of the breed. This caused the Oldenburg to continue its change.

With all this genetic mix, it is not surprising that the breed has become one of the most complete. They are excellent pack horses, also play notably the agricultural work, crown the list of carriage horses, and also, as we have mentioned previously, they stand out in racing and equestrian competitions.

The modern Oldenburg, selects stallions and mare for the continuity of the breed, based on the quality they possess as dressage and jumping horses. What's more, Oldenburg horses have competed in Dressage at the Olympics.

The Oldenburg or Verband Association has approved more than 220 horses and 7000 mares, in addition to those that are exclusively part of the reproduction program. This makes the Oldenburg book one of the largest in Germany.

Oldenburg Verband has a motto "Quality is the only standard that counts". This already speaks to us of the search for excellence in the breed. This is also evident in the great genetic mix that these equines have.

They put special emphasis on mares, some of which date back to the ancestors of Alt-Oldenburg.

In addition, every autumn, the association celebrates "Stallion Days" in Vechta, where young stallions are evaluated.

Full path to article: Noti horses » Horses » The Oldenburg horse, the heaviest of the German warmbloods