Draft horses are those used for work due to its great traction capacity. Traditionally they have been used for agricultural work, as a driving force and as draft horses on certain occasions that required moving machinery.

A draft horse, requires a little more specific care and feeding depending on the type and amount of work that they carry out in their day to day.

The vast majority of draft horse breeds they did not exist before the XNUMXth century. It was from this century that the military and agricultural needs that were defining the races heavy duty. In addition to the influence of the industrial revolution, the improvement of carriages and agricultural machinery.

Those Ones Countries that had trade routes found these powerful new equines very useful. Even those places with canals used them to transmit power to the water using wire ropes and mechanical devices.

In Spain there were no heavy draft horses until the XNUMXth century.

They are the largest of the draft horses weighed up to 180 cm at the withers. They are also large in size, weighing from 600kg to over 1000kg. Their limbs are rather short and its skeleton is strong with well developed musculature. In addition, they usually have a very calm character.

These are the lightest equines among draft horses. They normally performed tasks such as hauling light carriages at a higher speed than the previous two.

We find within this category breeds such as: Morgan or Hackney.

Heavy draft horses were used to till and move agricultural machinery of all kinds until horses and mules were replaced with technological advancement.

Transport of goods and people

It is well known that during different times goods were transported in horse-drawn carriages. These carriages could be of different shape and size, according to which, they had one name or another: cart, cart, tartata, galley.

You can know the different types of carriages that have been drawn by horses in our article: Horse carriages: history, types and uses

As highlights we are going to mention two, one for its great use and the second for curious:

For a long time the movements between cities or towns were carried out on horseback. The roads, which coincided with those built by the Romans, were bad or there were none. The use of the carriage was spreading and roads were built between the main cities, establishing stage lines between the main cities. It was the draft horses that fulfilled the function of leading these proceedings.

In Paris there was a network of trams pulled by equines.

As we mentioned earlier, those cities that had river transport, horses played an important role. The animals pulled the goods by means of ropes replacing the people or the mules that used to pull these goods until the appearance of the draft horses.

Draft horses were also used as a motive force to power machinery or devices such as looms, mills, presses, water pumps, etc. The animals were usually attached to a vertical axis winch to a line of radially arranged bars. The horses were arranged to walk in a circle with the force necessary to reach the power required in the operation of the machinery.

In difficult terrain, it is the draft horses who pull to haul the logs.

Draft horses are well known for their great strength and endurance. They are large, tall, large equines, although as we have already discussed, depending on the type of draft horse that a breed has, it will be more or less large. They can vary from 160 cm to 180 cm at the withers and be between 600 and 1000 kg, although those of heavy draft can surpass this last weight.

The bones of these horses are strong and large. His highly developed musculature. The profile of the head is usually short and convex lines, and the limbs rather short.

The coats can be very varied depending on the breed in question, although they usually have a rather thick coat. Some breeds, such as the Percherons, have their hooves covered in hair.

As for his character, it is about extremely calm animals.

And now yes, we are going to talk about four breeds of these equines.

We face one of the oldest breeds of draft horses. This breed is bred in the Ardennes, Belgium, Luxenburg and France, the first is where it gets its name. However, the history of these equines it dates back to much further back in history, to ancient Rome. Ardennes or Ardennes horses are the ancestors of most other draft breeds.

In their beginnings they were draft horses rather of the heavy category, but in the XNUMXth century, the breed was mixed with Arabian horses to lighten it. Today it is considered as semi-heavy draft horse.

Were very important to carry out work in the war, both as a draft horse and as a mounted cavalry.

If you want to know a little more about this breed you can find information in our article: Ardennes Horses, one of the oldest draft breeds

This breed of horse is the only draft horse developed in the United States that exists today. It gets its name from its cream or champagne gold cape and its amber eyes.

It is a breed with very few specimens although work is being done so that it is not lost.

Es one of the smallest draft breeds, at most they can reach 160 cm. In addition to being strong, it is a fairly active breed that is used as a farm horse. It has the pompadour and the blonde tail.

Originally from Belgium, it is one of the draft breeds that has been widely used in the United States and Canada. It was used above all for the transport of large loads.

This breed originated from the county of the same name. It was obtained by selecting indigenous breeds in the area. It is a long-lived breed that requires little food to survive. Today there are not too many copies.

This breed originating from Le Perche, in France, is not only known for its great strength and integrity but for its aesthetic characteristics so appreciated that they place it on many lists of the most beautiful horses in the world. 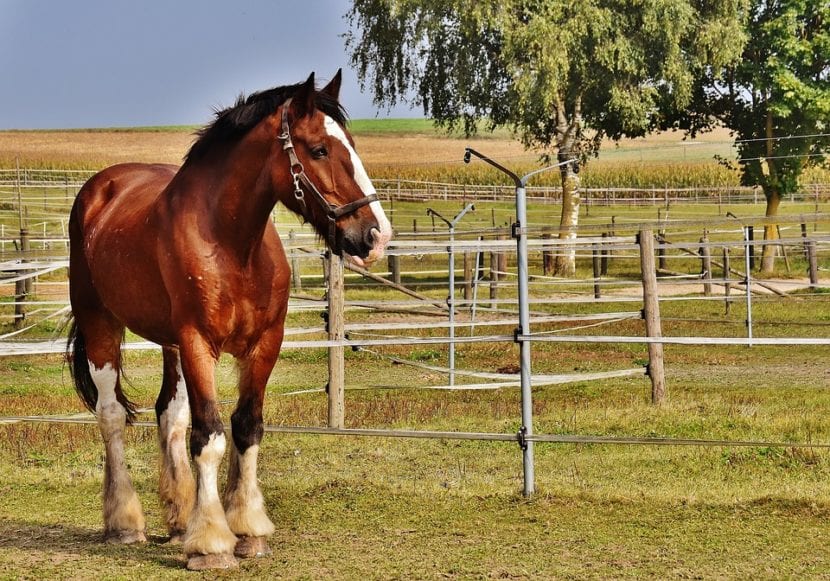 We are facing another draft horse from France. It is a breed developed in the nineteenth century and who owns a great intelligence. Its name derives from the Breton mountains, where it was very present.

It is a rustic breed, with a fast walk and a lively trot despite its large size. 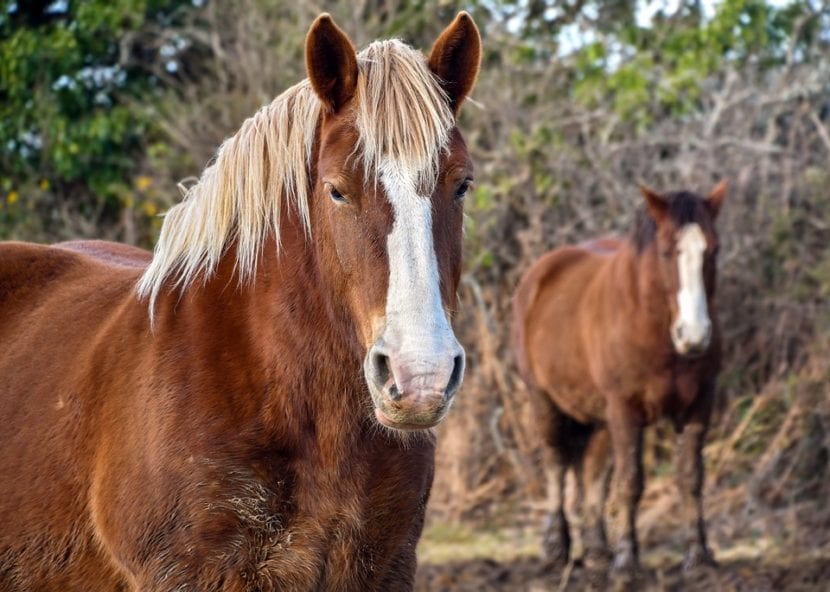 This breed of draft horses is the result of crossing of Scottish heavy draft mares and Flemish horses. It was improved by crossing with the Shire and Arabs. All this makes this breed more elegant.

With characteristics of Arabian and Berber horses, this is a breed of great size and weight (around 850 kg). It's a breed widely used for slow drag jobs.