In the front extremities, the ulna and the radius have joined, giving rise to a single bone, the same has happened with the tibia and fibula, preventing the hands and feet from being turned laterally.

Currently the bones of the heads of the horses are longer and they have a face that is twice the length of the skull. The jaw has also been elongated, with a wide and flattened surface in the lower part of the posterior area.

Horses have a minimum of 36 teeth of which 12 are incisors and 24 are malar. Your spinal column is made up of 51 vertebrae.

The skeleton of the horse is composed of 210 bones, This skeleton fulfills the function of being the support of the muscles, protecting the internal organs and allowing mobility so that it can regulate the different speeds.

Evolution of the horse skeleton

The skeleton has been adapted to satisfy the different functions.

Horses, like other animals, have evolved throughout its history, it implies that your bone structure has been changing. These changes can be seen mainly in the extremities of equines, although they are detected in other parts of their skeleton.

Due to their domestication and the tasks that humans have given them, horses can suffer damage at the muscular or bone level, therefore it is important to know what your body is like and which parts are most prone to injury, so that you can avoid it In a simple way.

If you want to know more about the bone evolution of equines, keep reading that we will tell you about it below.

The body of equines is divided into: head, neck, trunk and extremities.

In total the skeleton of horses is made up of about 210 bones and the spine is composed of 51 vertebrae. Of the vertebrae, 7 are cervical, 18 thoracic, 6 lumbar and 15 caudal. The skeleton has the function of supporting the muscles, as well as protecting the internal organs and allowing mobility so that they can regulate the different speeds. 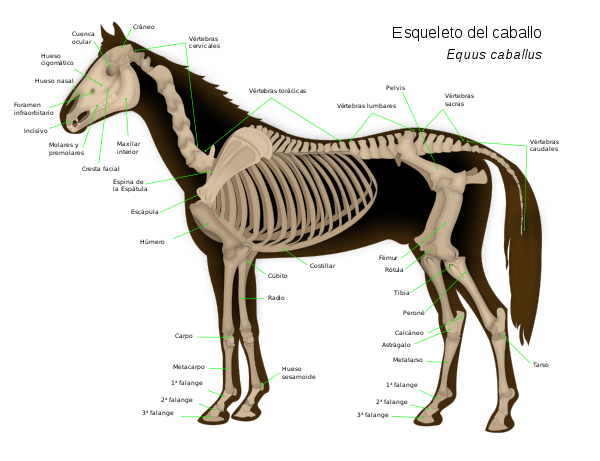 A curious fact is that the skeleton of horses does not have clavicles. Rather, the area of ​​the forelimbs is attached to the spine by muscles, tendons and ligaments.

The forelimbs are those that support the great part of the body weight of the horses.

The head of the horses

The head is one of the most expressive parts of horses and is also another of the bony parts that have changed. Currently, the bones that make up the head of horses are more elongated and they have a face whose length is twice the length of the skull bones. The jaw has also been lengthened, having a wide and flattened surface in the lower part of the posterior area.

The head is composed of:

In the mouth, horses have a minimum of 36 teeth of which 12 are incisors and 24 are molars.

The neck of the horses

The neck of the equine has trapezoidal shape, with a thinner base at the junction with the head and wider at the trunk.

The neck has a very important function since intervenes in the balance of equines.

The part where the manes are found can be straight, concave or convex depending on the breed of equine. A curious fact about the manes is that they are more populated in males than in females.

The trunk of equines

It is not only the largest area of ​​the equine anatomy, but also endows some qualities or others to horses depending on their shape and corpulence.

The shoulder joint area can also be injured frequently in jumping jacks.

Es important that the rider touches the spinal area frequently to assess possible discomfort in the animal and that they can be treated in time.

To avoid injury, the rider should avoid riding directly on the horse as soon as they leave the stable, as a significant weight is suddenly placed on them.

The trunk is divided into several parts:

As we can see, the skeleton has been changing, but why are these changes? the horses have been adapting to satisfy the different functions.

It must be taken into account that depending on the races there may be certain variations in some areas of the anatomy.