This week we are going to meet one of the oldest breeds of draft horses that exists: ardenes horses. They are Bred in the Ardennes, Belgium, Luxembourg and France. But its history goes back a long time, to Ancient Rome.

They are equines used mainly for agricultural tasks or those where it is necessary to move or transport heavy things, also for the production of meat, for competitive events and to be crossed with other breeds.

Let's talk a little more about them.

Also known as the Ardennes Draft Horse, they have their origins 50.000 years ago, being direct descendants of the equines represented in the cave paintings. They are also the ancestors of the vast majority of draft horse breeds.

Draft horse breeds were widely used in ancient times as a driving force. The current breeds, as we know them, they date from approximately the XNUMXth century. They were selected and crossed under military, agricultural and industrial needs, to perform certain tasks related to loads, whether it was moving machinery or transporting heavy goods.

Specifically, the breed in question has evolved throughout all its years of history, becoming horses of great strength, very willing and full of life.

Today are among the first places in the list of French draft horses, after the Percherons, the Bretons and the Comtois.

The typology within draft horses is divided between heavy draft horses and light type horses. The former, with a height between 170 cm and 180 cm and a weight from 600 to just over 1000 kg, were used to move machinery and heavier elements. The latter, lighter in weight, were intended for higher speed travel (higher than walking) and are associated with light carriages. The latter are also used in hitching competitions.

The Ardenes are intermediate between the light and the heavy. With a weight between 700 and 1000 kg and a height between 152 cm and 163 cm, They are not the largest among draft horses, nor are they the smallest, and they are a versatile draft breed because they are among the heavy and light types.

It's about equines highly resistant that can survive under adverse climatic conditions with little sustenance. They are broad, muscular and compact, with short, thick legs. All this makes them a horses of great strength. Despite having all this physical strength and energy, they are of character tame and easy to use, they also have a lively trot.

They have one broad head with expressive eyes and pointed ears, which rests on a wide neck. Their manes are abundant and long hairs on the limbs.

As for their fur, they can present layers with different colors: roan, thrush, chestnut or chestnut, sometimes with some white hairs in certain areas, like the head or the legs. A color not allowed in this breed is black.

As with all draft horses, depending on the work they are doing, they require a certain diet and care to maintain their health and good condition.

As we anticipated at the beginning of the article, we are facing a really old breed of horses. There are some data that reflect this, such as that they were already mentioned by the Roman emperor Julius Caesar in his account of the conquest of the Gauls, where he spoke of the great resistance of these equines.

Inhabits the French and Belgian region of the Ardennes, where its name comes from, for about 2000 years. We also find ardenes in Sweden, the result of crossing with horses from the north of the country. 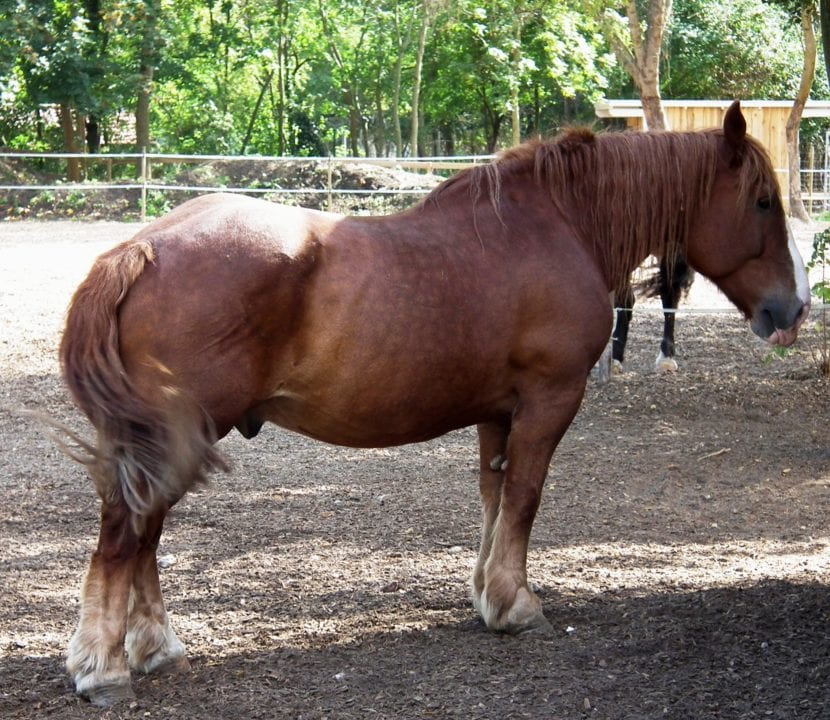 The Belgian variant of the Ardennes horse originated in the mountains themselves.

Throughout the history of this breed it has been mixed with other Ardennes bloods. And, as with many equines in the region, it is likely to have some Arab blood as a result of the Islamic invasion of Europe. Later, In the XNUMXth century, in order to lighten the breed and improve its resistance, it is known that it was mixed with Arabian horses.

It is believed that the current race, descended from the battle horses used in the Middle Ages.

What is clear is that they have been in high demand for war dutyBoth for mounted cavalry and as draft horses to tow artillery elements. To give a couple of examples in which they were used we have the invasion of Russia by the Napoleonic army or in the First World War.

At the end of XNUMXth century, the crosses with Le Brabant resulted in an even stronger and larger equine, very appropriate for agricultural and forestry work.

Le Brabant is the Belgian draft horse, characterized by its intelligence and large size and musculature. The males are around 170 cm tall and the females 166 cm. They have the powerful appearance of draft horses together with their very docile and meek character. All these characteristics were transmitted to the draft horse of the Ardennes however, As a consequence, the current breed of Arden horses is quite similar to Brabant.

These equines were brought to the United States in the XNUMXth century, the first to be recorded was in the 1920s.

It is currently raised in the French and Belgian mountains, although it can be found in different Swedish regions. They have been mixed with European and Asian races cold blooded, to improve the characteristics of these breeds, increasing its size and strength.

Today, it is still used occasionally, for work on small farms, vineyards and forests. It is also raised primarily for the meat market.

The number of specimens of this breed is not as numerous as in the past, but It is still a popular breed because of the competitions and shows that are held in Northern Europe.