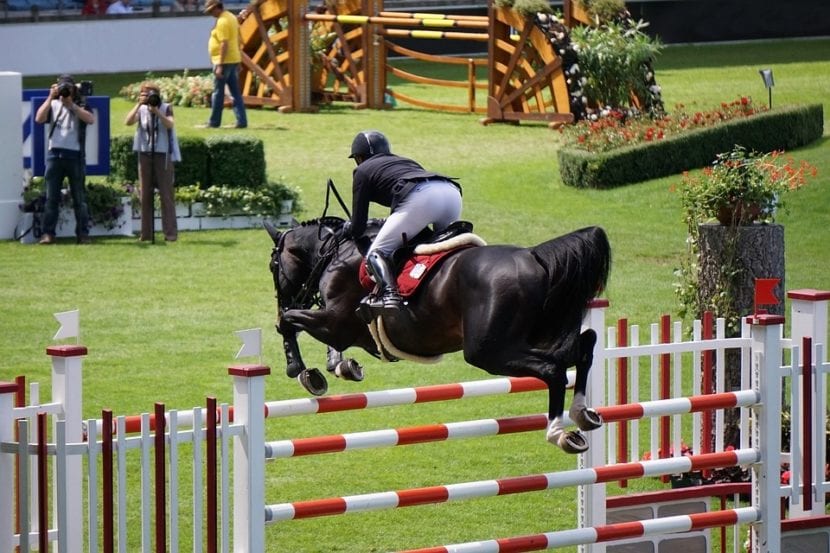 The Hanoverian horse breed is one of the typical equine breeds in Dressage. In addition, it is one of the most excels in jumping competitions. This is due to its main characteristics: its powerful and balanced anatomy and its docile character. All of this has made him one of the most successful breeds at a sporting level and therefore in popularity.

However, the creation of the breed was made with in mind to achieve a horse with good skills for agricultural work. A horse that would be widely used in the army. A breed of equines that ended up being one of the most valued in the sport as we have already announced.

Do we know them a little more?

The Hanoverian horse, It has its origin around the XNUMXth century in the city of Hannover, Germany, where its name comes from.

It was the result of crossing of different mares in the area with good characteristics for agricultural work y copies of the Holstein breed. This crossing resulted in the obtaining an elegant animal in the mount and light, that besides could do field work common.

With the passage of time, the breed would be modified to adapt to the new uses that were given to it, until it reached the current equine.

Characteristics of the Hanoverian Horse

With a height between 155 cm and 170 cm, this is a very agile breed, whose jumping power is very remarkable. This characteristic is due to its limbs: strong, compact, relatively short and with pronounced joints.

It has an elongated back, a muscular rump and a high-set tail. At the end of long thin neck, there is the head of a medium size, which has expressive eyes.

Now let's talk about the coat of the Hanoverian horse. The layers can be very varied, with any of the solid colors, being the most dark brown or chestnut colors are common.

A curiosity in the coat of this breed is that initially white horses were selected, but genetics made this color disappear completely.

As for their character, they are equines calm in nature, very docile and intelligent although sometimes, especially with hybrids, they can show stubbornness.

These characteristics were largely achieved by excluding aggressive animals at the time of breeding, only those equines with a calm temperament are used.

A little more of its history

We already mentioned at the beginning of the article that the Hanoverian breed largely comes from the Holsteiner. In addition, it has blood of the English thoroughbred and of the first horses originating in the Hannover area.

It was precisely this monarch who In 1735 he founded the first state breeding center in Germany. For this purpose the stud farm Celle town. They were horses of the race Holsteiner, descendants of native mares with Italian, Spanish and Oriental blood, destined to haul carriages due to its power and good looks. They were also used mares whose characteristics turned them into animals excellent for agricultural work.

The latter was important since the breeding of this breed had as aim to achieve a good horse in field work and it could also be versatile.

This was the breed of choice for pulling British royal chariots until the 1924th century. In 500, the number of stallions was around XNUMX at Celle. During the First and Second World Wars, the Hanoverian race suffered considerable damage.

At the end of the Second World War, the rearing of the Hanoverian breed increased in a significative way due to the increase in its use for sports. As a consequence, crosses with horses english thoroughbreds, with Trakehner and with arabs, getting one an even more powerful breed with lighter movements. The breeding was therefore dedicated to the saddle horse for competitions and especially jumping competitions. This new approach to the breed, turned these equines into authentic athletes.

Little by little it was being exported throughout the world, becoming one of the favorite breeds for dressage events and show jumping competitions of obstacles.

At present, the breed keep growing in the town of Celle, making a rigorous selection of the best specimens to ensure during the perpetuation of the breed that the characteristics that make these equines shine in sport are maintained. The Trakehners continue to be present to reinforce the group of stallions, since this breed influenced the development of the Hanoverian breed with great success.

To measure the validity of these stallions follow a process that indicates so much your chances for breeding as its characteristics for sport. This test is carried out when the animals are about two and a half years old. After which, they must go through a period of Exam with a rider where their ability to jump and dressage will be assessed, his character and intelligence, his ease in handling, etc. This test is known as «Test of the hundred days». If the horse does not exceed the established quota of 100 points, it is most likely that he will not be chosen as a stallion.

Our mares they also have their own selection process, first begin a tour of exhibitions to select to the best mares. At three years they start their first exam where their fertility will be valued.

Of great importance in the selection of mares and stallions for the breeding of the Hanoverian breed, are the German Federal ChampionshipsWhere the best German horse production is measured every year among which is this breed.

Today, it is one of the most important sports horse breeds in the world. The World Association of Sport Horse Breeders awarded the Hanoverian breed the top spot for more than 10 consecutive years in dressage and it has been in the top three in show jumping for more than 13 years.