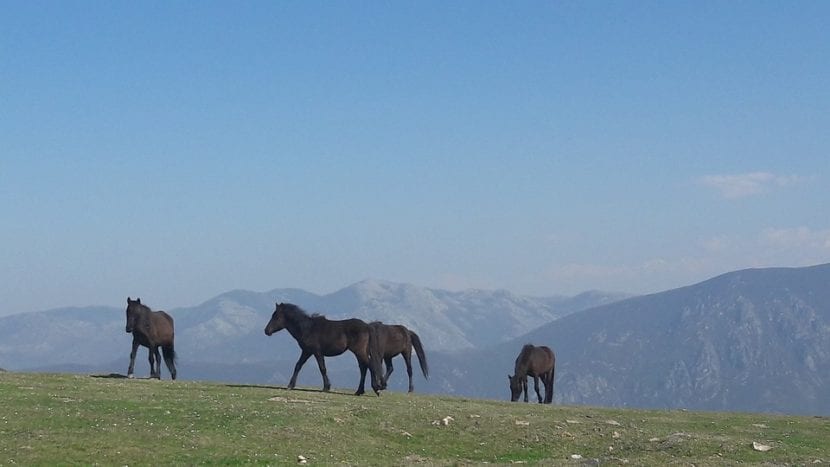 Native to Asturias, Asturcón It is part of the races that, in ancient times, populated the territories that go from the Cantabrian mountain ranges to the Pyrenees.

Also called Asturian pony, It is a small and rustic breed of equine, which has maintained a morphology very similar to when the race arose as such about 2.800 years ago.

Did we find out more about these interesting animals?

The Asturcón is one of the oldest small horses or ponies in the world. Are already collected testimonies that speak of them in the years 80 a. C. reflecting how valued they were for their speed and courage in combat, in addition to his smooth gait.

They have traditionally been used to perform agricultural tasks, although the race was spreading and being used for other tasks. In XNUMXth century Paris, for example, they were used as draft horses for small carriages.

Today the Asturcones have also made their way into the equine sport. Several specimens of this breed have reached the top as equestrian champions in various modalities in Spain.

With a height around 125 cm., Asturcones are small equines whose general appearance is that of a robust, agile and resistant pony, thanks to its well defined musculature.

Its medium-sized head with a slightly concave profile, has a broad forehead covered by thick bangs; large, black, lively eyes; small and highly mobile ears, and wide and dilated nostrils.

The moderately fine, proportionate neck is usually curved in adult males. It has anterior, oval and small glasses, while the posterior ones are very small or nonexistent.

The body, of espalda is very sloping, as is the rump, and well arched ribs, resting on thin limbs of small, rounded and very resistant hoofs.

El fur of this breed is dense with very bushy mane and low tail. The color of his cape is black, although it varies with the seasons. The Asturcón adapts to the mountain climate and covers its body with a coat of thick brown hair that protects you from the elements in cold weather.

Regarding their character they are very noble and vigorous. Once have been tamed, they show excellent temperament, ideal for children. They are equines very comfortable with a very good disposition to jump.

Historical references indicate that Asturcones date back more than 2.000 years. Abound texts in which the Romans mention these horses as they were part of the troops of the Roman Empire.

During the Middle Ages and Modern, the asturcón it was very important in the economy of Spain. They were exported to countries like Ireland or France where they pulled small carriages. Besides, of course, being sold to different Spanish areas as an agricultural horse.

This mythical breed has been preserved throughout time and today it constitutes one of the last exponents of autochthonous races of Southern Europe.

This breed is part of a large family of small horses or ponies that are distributed in the Atlantic Arc, the strip of the oceanic coastline that goes from Portugal to Scotland and that includes Spain, France, England, Wales and Ireland.

But let's go back to Asturcón. Thanks to inhabit the mountainous and rugged region of Asturias, with difficult communications until the twentieth century, the race was able to protect its purity by preventing crosses that made them lose their characteristics and, in addition, it limited its disclosure and export.

The conditions of the habitat where these equines have developed, have favored the appearance of some of the singularities that the breed possesses, such as, for example, those called in a popular way "Corru." It's a defensive strategy grouping in packs in which Asturcones live to face the attack of the wolves that have traditionally harassed them. When there is danger, the herd of horses is ready in a circle with rumps inwards and heads outwards to defend itself with the front legs. In addition, they place the hatchlings in the center of the circle where they are most protected.

Today, Asturcones continue to live in the mountains, although breeding farms also proliferate where the best specimens are selected, favoring the development and durability of the breed.

The deliveries arrive with the spring. After eleven months of gestation, the mares separate from the herd to look for a quiet and sheltered place to give birth to the new Asturcón. Practically almost always this fact is very fast and under the cover of night, thus reducing the possibility of an attack.

Another sign of the strength of the race is that only nine days after calving, the mares go into heat again, which leads them to raise them frequently until they are twenty-five years old.

In the 80s, private initiatives and emerging organizations such as ANA (Asturian Association of Friends of Nature), together with the promotion of the environmental awareness of the time, They managed to stop the alarming decline in the breed. The Asturcón Breed Pony Breeders Association (ACPRA). The disappearance of the breed seemed to be imminent but the actions carried out were successful and the breed was recovered.

To conclude this article and as a curiosity, we are going to talk about a festival that takes place in Asturias around these animals.

In the Majada de Espineres, in the middle of nature (Sierra del Sueve, Piloña), there is a festival that celebrates the recovery of the Asturian horse, this native, wild and rustic breed. It is a day full of activities where dressage shows and the exhibition of domesticated specimens both mounted by horsemen and pulling old carriages stand out.

The party has been declared of tourist interest in the Principality of Asturias.